Another train crawl? Get out of town! Way, way, WAY out of town… Join us for our first-ever Country Crawl on the furthest reaches of the Metra system! This all day crawl takes us waaaay out into the hinterlands of McHenry County with stops in Harvard, Woodstock, and Crystal Lake, with a special stop at the McHenry County Fair. We’ll wrap it up back in suburban civilization at a perennial Yard Social favorite, The Lamplighter Inn in Palatine.

Coming from the city? The UP-NW line conveniently shares the Jefferson Park terminal with the CTA’s Blue Line and several CTA bus routes including the #81-Lawrence.

Important Note: No alcohol is allowed on Metra trains on August 5 due to Lollapalooza.

The Metra UP-NW line begins at Ogilvie Transportation Center and runs almost directly northwest out of Chicago, paralleling Milwaukee Avenue and Northwest Highway. There are several transit options to connect with the UP-NW line outside of downtown.

The Jefferson Park Terminal offers direct connections between the CTA Blue Line and the UP-NW, as well as the following buses: 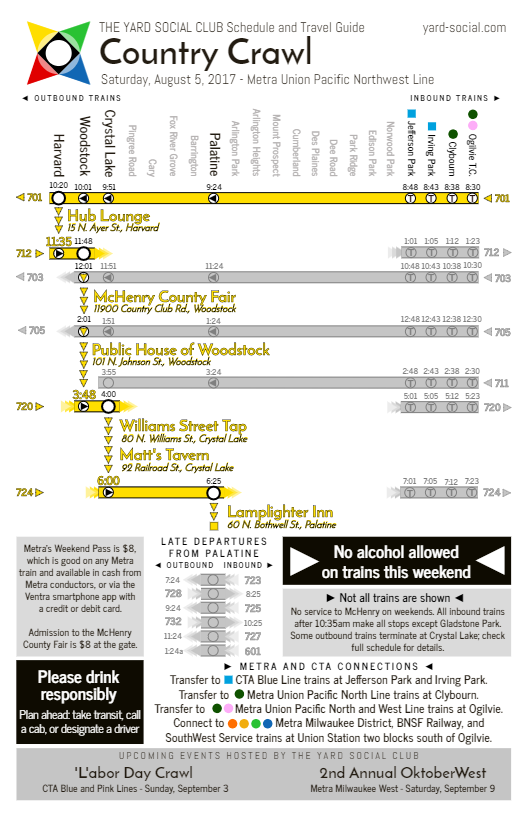 To open the map in a new window, click here.

Published by The Yard Social Club

View all posts by The Yard Social Club